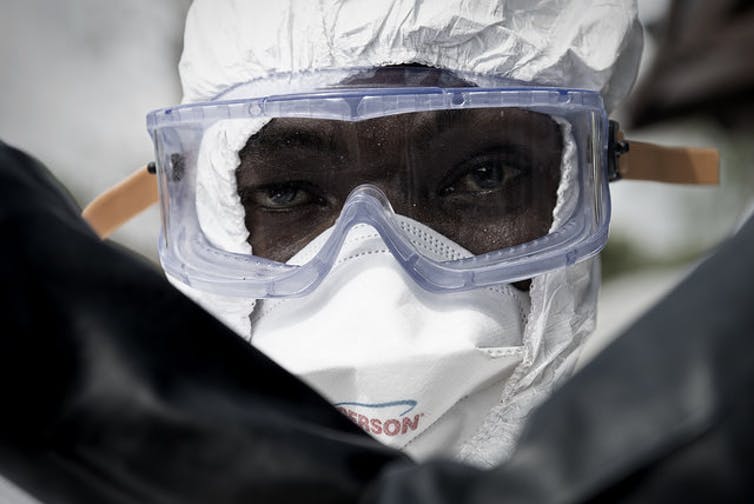 At least 17 people have died in an outbreak of Ebola Virus Disease in the north west of the Democractic Republic of the Congo (DRC) in the town of Bikoro. Ebola is endemic to the country. But the number of deaths in a short period is cause for concern. The Conversation Africa’s health and medicine editor Candice Bailey spoke to Chikwe Ihekweazu in Nigeria.

What are the critical steps that the DRC needs to take now that the outbreak has been confirmed?

Health authorities have learnt many valuable lessons from previous Ebola outbreaks – particularly the outbreak in 2014 in West Africa where more than 11 000 people died.

Because the DRC has had so many outbreaks it’s developed the capacity to deal with new ones. But, as with every other disease that threatens global health security, it is critical for nearby countries to collaborate with it to ensure the outbreak stays under control.

Bringing the outbreak under control has two important phases. Firstly, health authorities in the country must define its scale. Secondly, they have to interrupt its chains of transmission as quickly as possible.

Our colleagues at the Centre for Disease Control in the DRC are currently evaluating the people who are infected. There are several pieces of information that they want to establish: when and where people were infected, where they they’ve been – or travelled to – since being infected. This will give them a better understanding of the extent of the person-to-person transmission.

Once this has been established, the government can respond. Several control activities will be initiated almost immediately covering both prevention as well as treatment. From a prevention perspective, it’s important for the government to engage with communities so that people understand the outbreak and how quickly the virus is able to spread.

From a treatment perspective, health authorities need to set up treatment centres and access to laboratory diagnosis. Given the death rate, epidemiologists will have to be on hand to carry out detailed investigations on the origins of the outbreak. This is the only way the chain of transmission can be broken.

The DRC has had numerous outbreaks of Ebola. What challenges does the country face handling a virus like this?

As a result the country has gained a lot of experience in how to control the disease. But there are still many unknowns. One of the most critical gaps is understanding the transmission dynamics of the virus from its animal reservoir to humans.

The country has good systems for diagnosing the disease – its reference laboratory was able to test and confirm cases within 24 hours. But when it comes to surveillance and monitoring its systems are weak. Stronger surveillance systems would ensure that cases were reported early, and a country-led response mounted.

Nigeria is on high alert following the outbreak in the DRC. What are the concerns?

Nigeria, as well as other countries in Africa are at medium risk, according to a classification by the World Health Organisation.

Nigeria has learnt that it is better to be prepared than to be caught unaware.
To mitigate the risk, the country’s Centre for Disease Control has taken extra precautionary measures. This has included placing its emergency operations centre on alert and issuing a public health advisory. In addition, the national port health services have heightened screening at points of entry.


There are also protocols in place to ensure that if a case is suspected, it’s detected early and response activities are initiated immediately.

What steps will Nigeria take to help the DRC?

During the 2014 Ebola outbreak, the African Union arranged for health workers from Nigeria to go to Liberia and Sierra Leone. As a result of this initiative, Nigerian health authorities have a large cohort of well-trained resources that can be deployed to support the country if that’s needed.

Not just potheads: a look at who supports legal marijuana