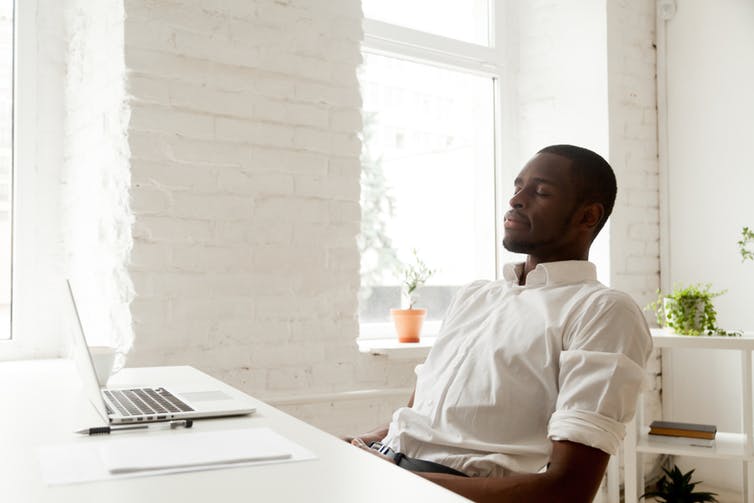 Practising mindfulness meditation for ten minutes a day improves concentration and the ability to keep information active in one’s mind, a function known as “working memory”. The brain achieves this by becoming more efficient, literally requiring fewer brain resources to do these tasks.

Many big claims have been made about the effects of meditation, but too often the scientific evidence behind these claims is weak or even lacking altogether. In our latest study, published in Scientific Reports, we addressed several shortcomings of earlier research to gain more certainty about what changes when people meditate.

Collaborating with colleagues from Osnabrück University in Germany, we carried out a randomised controlled study to investigate the effects of mindfulness meditation on cognitive functions that are important in daily life.

For our study, we randomly allocated 34 participants to one of two groups. For eight weeks, one group practised mindfulness meditation while the other group – the control group – performed muscle relaxation exercises.

Using so-called “active controls” – where controls are given a similar task rather than doing nothing – rules out many alternative reasons for changes in task performance. For example, simply being selected for the experimental group or engaging in any new activity might boost performance, without being the effect of meditation practice.

We also addressed other limitations of earlier research. For example, in some studies, the cognitive tasks were so simple that all participants, experimental and controls, reached an optimum level, which overshadowed the potential effects of meditation. Sometimes, participants only needed to distinguish and respond to four different stimuli that repeatedly appeared on a screen, one by one. Soon, all participants had optimised their performance. To avoid this, we used the challenging multiple object tracking task.

The task involves tracking two to five discs (“targets”) that are moving on a computer screen, among 16 identical discs that are also moving on the screen. Participants need to concentrate on the target discs without getting distracted by the other non-target discs.

We tested participants on this task a few days before and after practising either meditation or the relaxation exercises for eight weeks. (Participants in the meditation group meditated about four times a week over the eight-week period.)

In the meditation group, the accuracy of tracking the targets rose by about 9% – a statistically significant change – showing that their concentration and working memory had improved. The participants in the control group did not improve at all.

To find out what changed in the brain, we recorded the participants’ brain activity with an electroencephalogram (EEG) while they performed the task. We combined this with a method we pioneered 15 years ago: rapidly switched the moving discs on and off at a fixed rate of 11Hz. Their continuous flickering drives a brain signal called the steady-state visually evoked potential (SSVEP). Put simply, the brain generates electrical activity with the same frequency as the flickering discs, a signal that is then picked up by the EEG.

We found that after the eight weeks of training the SSVEP signal was reduced by about 88% – again, only in the meditation group. Based on previous work, we know what this reduction means. The brain networks involved in tracking the discs became more refined so that fewer brain resources were needed to carry out the task.

Most research investigating mindfulness meditation uses complex programmes, such as mindfulness-based stress reduction. However, because these programmes include yoga, stretching and different types of meditation, it is impossible to say whether reported improvements are truly the result of a particular meditation practice.

For clarity, we instructed the meditation group to do one simple meditation exercise for ten minutes a day. The exercise is called mindful breath awareness meditation. It involves focusing on the sensation of your breath – for example, the air flowing in and out of your nostrils. If any thoughts, feelings or other sense impressions arise, you should just recognise them and return to the breath, without judging the distraction or further thinking about it.

It is curious that simply focusing on the breath in a balanced way can have such an effect on concentration and working memory. We think this is happening because meditation is a form of brain network training, where the same brain networks are repeatedly activated and so become more efficient. It seems that this form of meditation targets core brain networks, interconnected areas of the brain that work together and play a key role in many cognitive tasks.

It is easy to see how this is relevant for daily life. Staying concentrated, singling out important from distracting information and keeping it in mind, are useful skills in situations of information overload. For instance, radar operators perform better on this task and, on a more mundane level, so do people playing fast-paced video games.

So, let’s get started:

We feel the formless stream of air at the tip of our nose and let thoughts, sounds and feelings pass without evaluation…

Getting on and getting it on: good sex isn’t just for the young