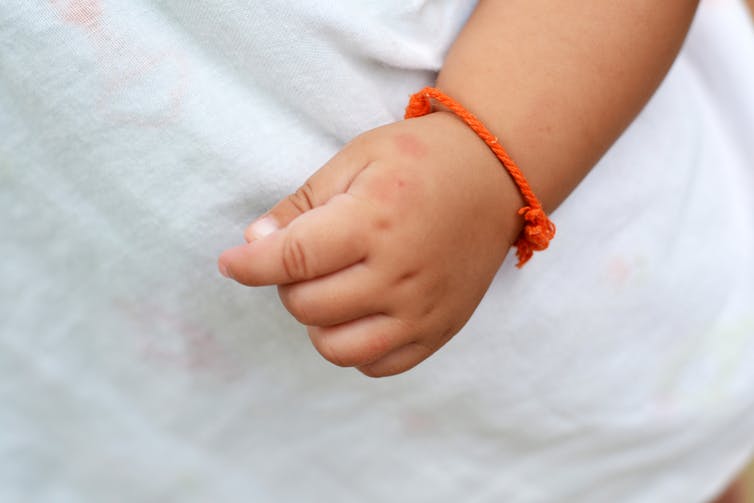 This article is part of our series about skin: why we have it, what it does, and what can go wrong. Read other articles in the series here.

Dermatological emergencies are uncommon, but can cause devastating complications and death if not recognised and treated early. Some skin conditions require treatment in an intensive care unit. Here are some of the most serious skin conditions and what you should know about recognising them.

Necrotising fasciitis is a severe infection of the skin, the tissue below the skin, and the fascia (fibrous tissue that separates muscles and organs), resulting in tissue death, or necrosis. The infection is rapid, fast-spreading and fatal if not detected and treated early. If not treated with antibiotics and surgery early, toxic shock and organ failure are common.

Necrotising fasciitis may occur in anyone. Previously healthy young people are often affected.

The cause may be one or more bacteria entering the body via an external injury or punctured internal organ. Group A streptococci bacteria, which are the organisms implicated in “strep throat”, are among the most common causes.


Early necrotising fasciitis is easily missed, as similar symptoms are commonly seen in less severe infection. The initial area is painful, red and swollen. This progresses to a dark, blistered, malodorous and blackened area, which is a sign of tissue death. Other symptoms include fever, intense pain, low blood pressure and shock.

The most important risk factors for necrotising fasciitis include diabetes, peripheral vascular disease, trauma, alcohol and intravenous drug use, and use of non-steroidal anti-inflammatory drugs.

Treatment of necrotising fasciitis is immediate hospitalisation, surgical removal of all dead tissue, and intravenous antibiotics. Patients often require intensive care. Management of shock and other complications reduces the risk of death. Use of a hyperbaric chamber (to increase oxygen delivery to the tissue) and immune therapy may also be required.

Around a quarter of people diagnosed with necrotising fasciitis will die, and sepsis occurs in up to 70% of cases.

Staphylococcal scalded skin syndrome is an uncommon major skin infection. It typically affects newborn babies, young children and adults with reduced immune systems or kidney failure. This syndrome is caused by toxins produced by the bacterium Staphylococcus aureus, which is common in throat, ear and eye infections.

Around 15-40% of adults carry Staphylococcus aureus on the skin surface and have no problems. But these adults may inadvertently introduce the bacteria into nurseries or daycare centres. Because young children have weak immunity to specific toxins, they’re at increased risk of scalded skin syndrome.

Scalded skin syndrome is characterised by a red, blistering rash resembling burns. Early symptoms include fever, skin redness and skin tenderness. Other symptoms may include sore throat or conjunctivitis.

Within 24-48 hours, fluid-filled blisters form on the entire body. The blisters may rupture, leaving areas resembling burns. Large areas of the skin peel off and fall away with only minor touch.

Read more:
Common skin rashes and what to do about them

Other treatment includes intravenous fluid and electrolyte maintenance to prevent shock and other complications, paracetamol for pain and fever, and avoidance of severe sepsis. Sepsis is when chemicals released into the bloodstream to fight an infection trigger inflammatory responses throughout the body, which can be life-threatening.

Complications of scalded skin syndrome include severe infection, pneumonia, cellulitis (a bacterial skin infection) and dehydration. Most children treated appropriately recover well and healing is complete within a week.

Standing for “drug reaction with eosinophilia and systemic symptoms,” DRESS syndrome is a severe reaction that affects the skin and internal organs. The patient may have an extensive rash, fever, enlarged lymph nodes and damage to the liver, kidneys, lungs, heart, blood components or pancreas. Symptoms usually start two to eight weeks after the responsible drug has been taken.

The death rate is estimated between 10 and 20%, most often due to liver failure.

The most common drugs responsible include anticonvulsants, antidepressants, non-steroidal anti-inflammatory drugs, antibiotics and sulfa drugs (a type of synthetic antibiotic). The severe reaction is thought to occur due to a pre-existing genetic change in the immune system, a triggering illness (most often a viral infection) and defective breakdown of the drug by the body.

Early diagnosis is essential. The responsible drug must be stopped immediately and patients may require intensive care or burn unit management. More intensive treatment is needed if organs are involved.

These are unpredictable reactions that leave sufferers critically unwell, with widespread death of the outer skin layer (epidermis), which peels off. The rash generally begins on the trunk and extends to the limbs and face, and there is intense skin pain. Before the rash appears, symptoms include fever, sore throat, runny nose, conjunctivitis and general aches.

It’s almost always caused by medications. The most common medications causing this reaction are anticonvulsants, antibiotics, allopurinol (gout medication), non-steroidal anti-inflammatory drugs and an HIV drug. The reaction usually occurs in the first eight weeks after taking the drug. It’s more likely to happen if the patient has cancer, HIV or specific genes that may play a role.

This reaction can be fatal by causing dehydration and malnutrition, severe infection, respiratory failure, gastrointestinal complications and multi-organ failure.

The responsible drug has to be stopped, and treatment (in a burns unit and intensive care unit) includes wound care, fluid management, pain management and prevention of infection. Long-term complications, including scarring, eye, oral, genital, lung disease and mental health disorders, are common. Around a quarter of people with this reaction will die.

Read more:
The skin is a very important (and our largest) organ: what does it do?

The mystery of breast cancer

what is pain and what is happening when we feel it?