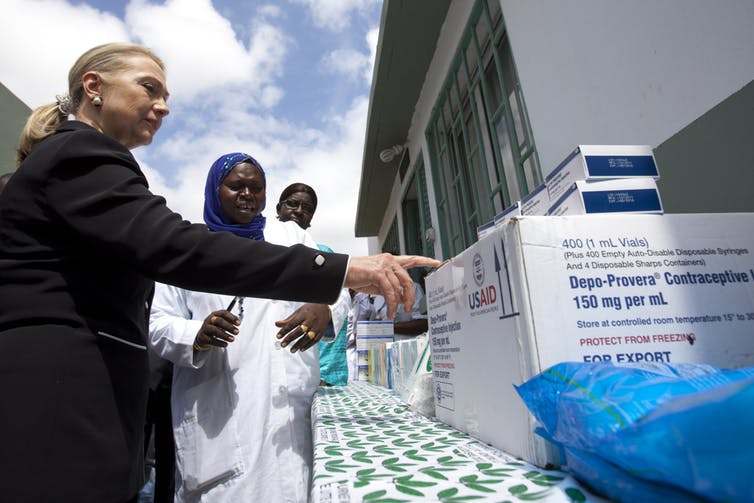 More women are affected by human immunodeficiency virus (HIV) than any other life-threatening infectious agent. This makes it crucial to identify all factors increasing the risk of HIV infection.

One risk factor may be injectable hormonal contraceptives. Worldwide, these drugs are used by 41 million women and about 2 million women in the United States. The most popular is Depo-Provera.

While clinical studies indicate women using injectable hormonal contraceptives are more susceptible to HIV, no study has proven they cause women to acquire HIV infection. This lack of definitive proof makes it difficult to develop usage guidelines for these drugs.

My lab studies genital immune responses in humans and animal models. In experiments with female mice, we uncovered how Depo-Provera may promote HIV transmission and a way to potentially avoid this effect.

Based on its link to HIV transmission, last year the World Health Organization revised its recommendation for Depo-Provera, changing its classification from “use without restriction” to “benefits outweigh theoretical or proven risks.”

This change was designed to ensure women are informed by health care providers of the potential risks associated with Depo-Provera.

However, the WHO also advised that clinicians continue providing unrestricted access to Depo-Provera.

Our incomplete understanding of Depo-Provera’s effects thus creates a public health dilemma. On one hand, women must be informed of the data that indicate injectable contraceptives increase their HIV risk. On the other, Africa and other areas with high burdens of HIV disease have high infant and maternal mortality rates and great need for effective contraception.

Moreover, some believe the links seen between Depo-Provera and HIV are behavioral, not biological. In other words, women using hormonal contraception acquire HIV more often simply because they have more unprotected sex.

These uncertainties suggested new research strategies were needed to understand relationships between Depo-Provera and HIV transmission.

Exploring the connection in mice

To define the effects of Depo-Provera on HIV transmission, my lab injected female mice with human blood cells, a process called “humanizing.” These humanized mice can be used to examine how specific treatments alter human immune cell function and to study HIV and other human pathogens.

We found that treating humanized mice with Depo-Provera made their genital tissue more permeable to immune cells called leukocytes. This increase in permeability likewise made it easier for HIV-infected leukocytes to invade genital tissue and cause systemic infection.

Our findings thus provide plausibility for the suspected increased risk of HIV in women using Depo-Provera. Supporting the relevance of our work for women, animal models and clinical studies have indicated that the HIV-infected leukocytes we used are an important cause of HIV transmission in humans.

Looking to mice for solutions

However, we also used mice to show that increases in tissue permeability and HIV transmission caused by Depo-Provera were eliminated in mice treated with Depo-Provera and Premarin, a vaginal estrogen cream prescribed to menopausal women.

This implies contraceptives releasing progestin and estrogen have the potential to avoid the increases in HIV susceptibility caused by Depo-Provera alone.

While intriguing, this conclusion is speculative, as mice do not model all changes seen in the genital tracts of women using Depo-Provera.

Therefore, before contraceptives that contain progestin and estrogen are adopted as a HIV prevention strategy, it will be crucial to confirm our results in nonhuman primates and clinical trials. Importantly, clinical studies testing this strategy can start immediately, as contraception releasing both estrogen and progestin is already commercially available.