LATEST NEWS
Home kigalihe Explainer: what are mitochondria and how did we come to have them? 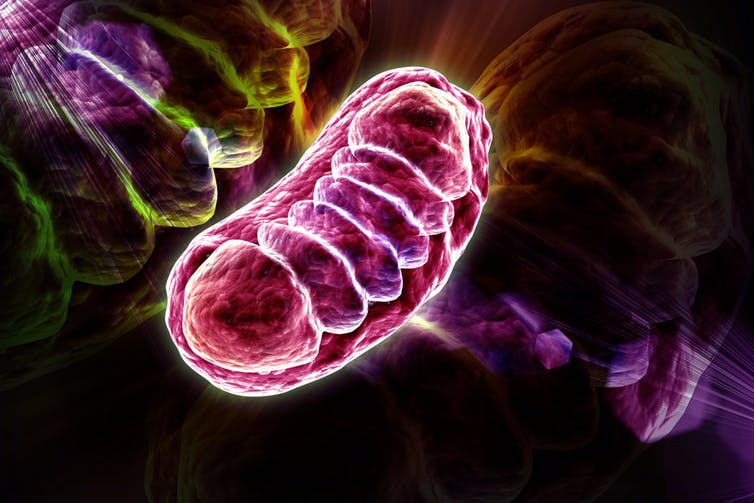 Steven Zuryn, The University of Queensland

We’ve probably all heard of mitochondria, and we may even remember learning in school that they are the “powerhouses of the cell” – but what does that actually mean, and how did they evolve? To answer this question, we have to go back about two billion years to a time when none of the complexity of life as we see it today existed.

Where did mitochondria come from?

Our primordial ancestor was a simple single-celled creature, living in a long-term rut of evolutionary stagnation. Then something dramatic happened – an event that would literally breathe life into the eventual evolution of complex organisms. One of the cells engulfed another and enslaved it as a perpetual source of energy for its host.

The increase in available energy to the cell powered the formation of more complex organisms with multiple cells, eyes, and brains. Slowly, the two species became intertwined – sharing some of their DNA and delegating specific cellular tasks – until eventually they became firmly hardwired to each other to form the most intimate of biological relationships. Two separate species became one.

Read more: Viewpoints: the promise and perils of three-parent IVF

These energy slaves are the mitochondria, and there are hundreds or even thousands of them inside every one of your cells (with the exception of red blood cells) and in every other human alive. They still resemble their bacterial origin in appearance, but we can no longer exist without them, nor they without us. The evolutionary explosion powered by mitochondria is evident by the fact they are found in every complex multicellular organism that has ever existed, from giraffes to palm trees, mushrooms and dinosaurs.

As vestiges of their ancient origin, mitochondria still have their own genome (although some of their DNA has been transferred to our genome). It’s alien in appearance and composition when compared with our own nuclear genome (the DNA inside each of your cell’s nuclei that contains about 20,000 genes). In fact, our nuclear genome shares more in common with that of a sea sponge than with the mitochondrial genome inside our own cells.

Read more: Do you share more genes with your mother or your father?

What do the mitochondria do?

The mitochondrial genome is vital for the mitochondria’s main role: burning the calories we eat with the oxygen we breathe to generate the energy to power all of our biological processes. But this amazing source of energy is not without its cost.

Like any powerhouse, mitochondria produce toxic byproducts. Free radicals (highly reactive oxygen molecules with an odd number of electrons that can cause ageing and health problems) can be created by accidents that happen during energy production.

So in essence, mitochondria power and imperil our cells.

A combination of these two effects results in the mitochondrial genome mutating up to 50 times faster than the nuclear genome, which is meanwhile kept safely in the nucleus. These mutations can be passed down to maternal offspring, causing devastating metabolic disorders in the next generation.

What happens when something goes wrong?

These diseases are currently incurable. But multiple lines of investigation are currently underway to treat and prevent transmission to subsequent generations.

Despite this, during life, it’s inevitable that mutations will occur in the mitochondrial genome in an individual’s neurons, muscle, and all other cells. Compelling work now suggests that the accumulation of these mistakes may contribute to the progressive nature of late-onset degenerative diseases such as Alzheimer’s and Parkinson’s.

The health of this seemingly alien genome is inextricably linked to that of our own bodies. As we come to grips with mitochondria’s importance in disease, we continue to uncover the intimate secrets of a two-billion-year relationship that has given complex life to the planet.

Legal weed: What your kids really need to know