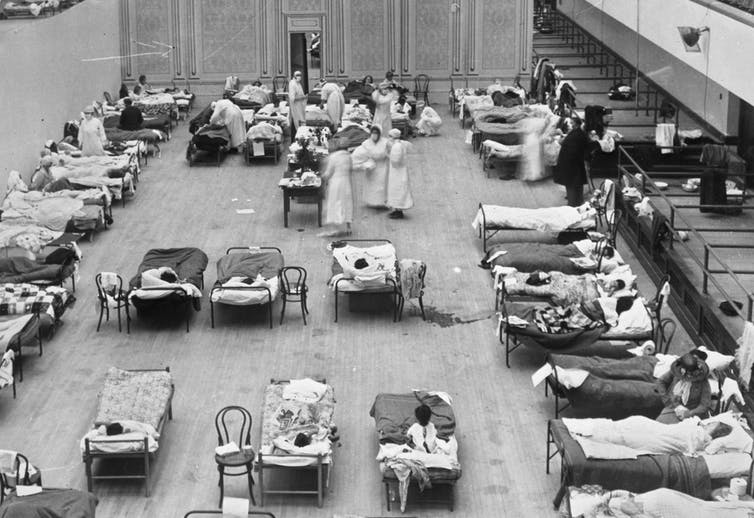 It’s a matter of scale. (Edward A. “Doc” Rogers/Library of Congress via AP

The World Health Organization has declared COVID-19 a pandemic. This is a landmark event. As an epidemiologist listening to the steady stream of conversation around the coronavirus, I’m hearing newscasters and neighbors alike mixing up three important words my colleagues and I use in our work every day: outbreak, epidemic and pandemic.

Simply put, the difference between these three scenarios of disease spread is a matter of scale.

By tracking diseases over time and geography, epidemiologists learn to predict how many cases of an illness should normally happen within a defined period of time, place and population. An outbreak is a noticeable, often small, increase over the expected number of cases.

Imagine an unusual spike in the number of children with diarrhea at a daycare. One or two sick kids might be normal in a typical week, but if 15 children in a daycare come down with diarrhea all at once, that is an outbreak.

When a new disease emerges, outbreaks are more noticeable since the anticipated number of illnesses caused by that disease was zero. An example is the cluster of pneumonia cases that sprung up unexpectedly among market-goers in Wuhan, China. Public health officials now know the spike in pneumonia cases there constituted an outbreak of a new type of coronavirus, now named SARS-CoV-2.

As soon as local health authorities detect an outbreak, they start an investigation to determine exactly who is affected and how many have the disease. They use that information to figure out how best to contain the outbreak and prevent additional illness.

An epidemic is an outbreak over a larger geographic area. When people in places outside of Wuhan began testing positive for infection with SARS-CoV-2 (which causes the disease known as COVID-19), epidemiologists knew the outbreak was spreading, a likely sign that containment efforts were insufficient or came too late. This was not unexpected, given that no treatment or vaccine is yet available. But widespread cases of COVID-19 across China meant that the Wuhan outbreak had grown to an epidemic.

International and out of control.

In the most classical sense, once an epidemic spreads to multiple countries or regions of the world, it is considered a pandemic. However, some epidemiologists classify a situation as a pandemic only once the disease is sustained in some of the newly affected regions through local transmission.

To illustrate, a sick traveler with COVID-19 who returns to the U.S. from China doesn’t make a pandemic, but once they infect a few family members or friends, there’s some debate. If new local outbreaks ensue, epidemiologists will agree that efforts to control global spread have failed and refer to the emerging situation as a pandemic.

Epidemiologists are principally concerned with preventing disease, which may be fundamentally different than the broader concerns of governments or international health organizations.

The WHO has declared only two pandemics in history – for influenza in 1918 and for influenza H1N1 in 2009. For weeks, epidemiologists like me have been calling the coronavirus a pandemic. From an epidemiological perspective, the WHO’s declaration is overdue. As of March 11, the official numbers count an excess of 120,000 cases in at least 114 countries. Eight countries, including the U.S., have more than 1,000 cases each, and community spread has been documented in several U.S. states.

Pandemic is the highest level of global health emergency and signifies widespread outbreaks affecting multiple regions of the world. However, the WHO statements remain hopeful that the pandemic can be controlled and the damage minimized by taking immediate aggressive steps.

The formal declaration of COVID-19 or any other infectious disease as pandemic tells governments, agencies and aid organizations worldwide to shift efforts from containment to mitigation. It has economic, political and societal impacts on a global scale, and the WHO takes extreme care when making this determination.

This formal declaration needn’t incite fear or cause you to stockpile surgical masks. It doesn’t mean the virus has become more infectious or more deadly, nor that your personal risk of getting the disease is greater. And it doesn’t mean that efforts to fight COVID-19 are being abandoned. But it is an historical event.

This is an updated version of an article originally published on March 5, 2020.

The latest blood pressure guidelines: What they mean for you

What is Benign Prostatic Hyperplasia?