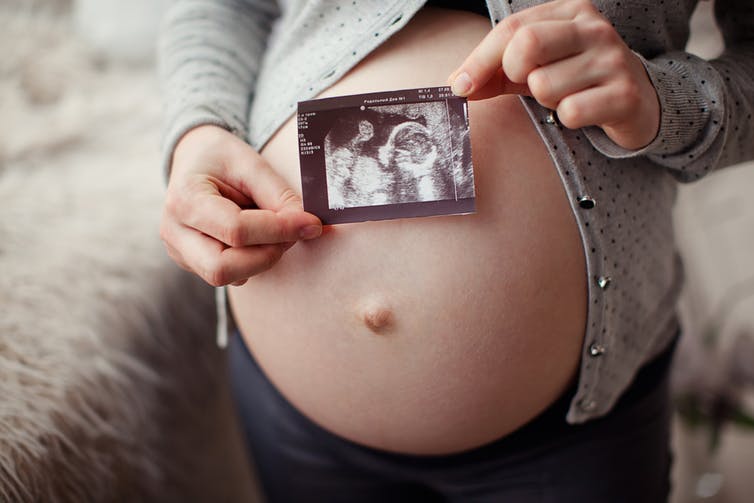 How foetal alcohol spectrum disorders could be a hidden epidemic

There is no safe limit of alcohol consumption during pregnancy. www.shutterstock.com

The new Department of Health guideline on alcohol says that there is no safe alcohol limit for pregnant women. Alcohol should simply be avoided.

Alcohol exposure during pregnancy can cause damage to the body and brain of the baby, causing a range of lifelong problems. These problems are grouped under the umbrella term “foetal alcohol spectrum disorders” (FASD). The most recognised form of FASD is foetal alcohol syndrome (FAS). People with FAS have distinctive facial features, are small for their age and have problems with learning.

The exact number of drinks a woman can have before harming her baby is unknown (and is likely to vary from woman to woman), so most countries, including Canada, Australia and the USA, have taken a conservative approach and recommended that no alcohol is the safest option. This new guideline now brings the UK in line with those and many other countries.

May be as prevalent as autism

We don’t know how many people have FASD in the UK, but based on a large review of data from other countries, it’s estimated that it may affect as much as 2% of the population. This would put FASD on a par with well-recognised developmental disorders such as autism spectrum disorder. In fact, a significant proportion of children currently diagnosed with ADHD or autism may have undiagnosed FASD as an underlying cause of their learning problem.

One problem with recognising the extent of the hidden epidemic is that FASD is significantly under reported. For example, out of a search of five years’ worth of outpatient hospital data in England, no cases of FASD were recorded. The researchers also looked at hospital admission data, expecting to find that areas with higher levels of alcohol-related illness in young women (such as in the north-west and north-east of England) would also have higher levels of FASD. This was not the case, suggesting that either FASD is not diagnosed, or it is diagnosed but not routinely recorded in hospital data.

Diagnosis is dogged by difficulties, including the fact that many healthcare professionals don’t know much about FASD and specialist training is needed to make a diagnosis. A diagnosis has to be made by a team of different professionals following a thorough assessment of the child that involves a physical examination, intelligence tests, occupational and physical therapy, and psychological, speech and neurological evaluations, as well as genetic tests to rule out genetic causes of problems.

Another difficulty with getting a diagnosis is that the behavioural and developmental problems that are signs of FASD may not emerge until a child is at primary school, by which time vital evidence about whether the birth mother drank during pregnancy may be missing. This information is crucial to make a diagnosis if the distinctive facial features seen in full-blown FAS are not present. Another difficulty is that people with FASD usually have other disorders (such as ADHD or autism spectrum disorder), making it difficult to isolate FASD.

To get the true number of people with FASD, it would be necessary to screen a whole group of the general population. This has been done in other countries, such as Italy, the USA and Canada, but there has been no such study in the UK.

Last summer, a cross-party group of MPs took an interest in FASD, forming the All Party Parliamentary Group (APPG) for FASD. In its first report, released in December 2015, it made a number of recommendations including the call for a public health campaign to raise awareness of FASD. The APPG also called for “urgent consideration to be given by the government into commissioning a UK-wide study to ascertain the prevalence of FASD”. This would be a vital first step in uncovering the true extent of FASD.

Why is such recognition important? The consequences of unrecognised and unsupported FASD are wide, including addiction, mental health problems and disengagement with education. Children can appear bright and talkative and can appear to learn, but often forget what they have learned by the following day. They can also behave inappropriately. Because the cause of their difficult behaviour is not understood, they frustrate teachers and are often labelled as “naughty”. Sadly, another tragic consequence of unrecognised FASD, is that many go on to find themselves in trouble with the law.

Early detection and intervention are important because with the right support, there is growing evidence that people with FASD can live and work independently. But, until the UK catches up with the USA, Canada and Italy, many people with FASD will continue to suffer in silence.