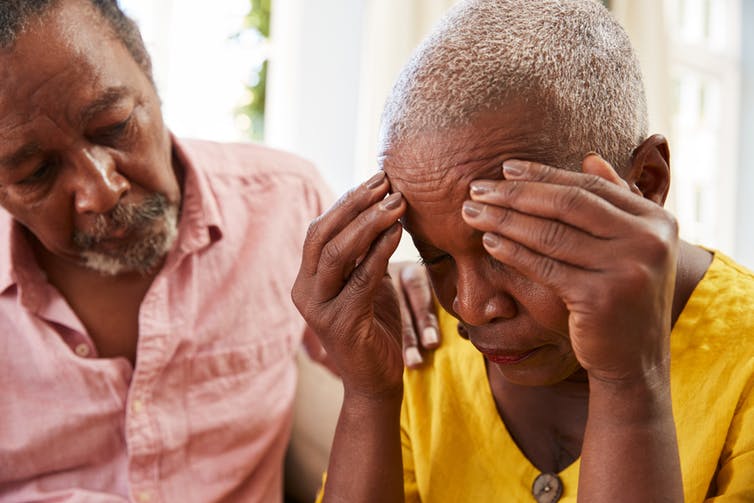 This trend is often compounded by three factors: ignorance about the extent of mental health problems, stigma against those living with mental illness and mistaken beliefs that mental illnesses cannot be treated.

Absence of treatment is the norm rather than the exception across the continent. The “treatment gap” – the proportion of people with mental illness who don’t get treatment – ranges from 75% in South Africa to more than 90% in Ethiopia and Nigeria.

Yet there are several reasons to give greater priority to mental health. These include the fact that doing so delivers other health benefits; that it helps tackle socioeconomic challenges; that there are economic benefits; and that human rights offences are reduced.

Mental and physical health are inseparable

Chronic non-communicable diseases such as hypertension and diabetes, as well as infectious diseases like HIV and tuberculosis, have high levels of co-morbidity with mental illness. This co-morbidity doesn’t only influence disability but also has direct consequences for mortality.

Maternal depression has also been shown to affect the development and growth of infants.

In addition, research shows that people living with mental illness or substance use disorders are more likely to become infected with HIV.

In a further twist, people with HIV have been shown to be twice as likely as the general population to be depressed. And treating them for depression improves adherence and boosts their immune systems.

There are strong links between mental health and poverty. In a large review of 115 studies from 36 low and middle-income countries we found that poverty was strongly associated with common mental disorders. These included depression, anxiety and somatoform disorders (psychological disorders with inconsistent physical symptoms). The study included several African countries.

In addition, the relationship between mental health and poverty is cyclical. Conditions of poverty increase the risk of mental illness. This happens through the stress of food and income insecurity, increased trauma, illness and injuries and the lack of resources to cushion the blow of these events. Conversely living with a mental illness leads those affected to drift into poverty through increased healthcare expenditure, disability and stigma.

People living with mental illness (particularly severe mental illness) are frequently stigmatised, shunned, and excluded from mainstream society. This is as true in Africa as it is in societies around the world.

Those with schizophrenia, bipolar mood disorder and epilepsy are frequently subjected to human rights abuses. They are often cast aside because of beliefs that psychosis or epileptic seizures are signs of demon possession or evil spirits. And they are denied access to life changing treatment.

A range of mental health interventions across the continent are leading to clinical improvements.

Since the early 2000s, a series of randomised controlled trials in African countries have provided compelling evidence that mental health interventions are highly effective. These include pharmacological and psychological interventions. Many of these have used non-specialist health providers in local communities, reducing the cost of care.

In northern Uganda for example, scientists have shown significant improvements in depression and daily functioning by using group inter-personal therapy. These were delivered by local non-specialist facilitators.

In Zimbabwe primary care clinics in Harare have introduced a “Friendship Bench”, a counselling intervention delivered by lay health workers. Significant improvements in depression, anxiety, disability and health related quality of life have been noted.

Read more:
How a community-based approach to mental health is making strides in Zimbabwe

We’ve conducted a systematic review of interventions that break the cycle of poverty and mental illness. Most studies that evaluated the economic impact of these interventions showed how clinical and economic improvements went hand in hand.

As this new evidence emerges, the tide is beginning to turn. In April 2016, the World Bank and the World Health Organisation held a high level meeting in Washington DC titled “Out of the Shadows: Making Mental Health a global development priority”. This led to these two global bodies committing to the WHO global Mental Health Action Plan (2013-2020) and the World Bank’s recently established Mind, Behaviour and Development Unit.

The critical question is how evidence-based interventions can be taken to scale using existing health care systems, while maintaining quality.

This question has occupied the consortium of researchers working under the umbrella of Programme for Improving Mental Health Care since 2011 in Ethiopia, India, Nepal, South Africa and Uganda.

In a similar vein, studies are being conducted in low and middle-income countries by the Emerald consortium which is working in the five countries as well as Nigeria. The aim is to strengthen information systems, improve governance and calculate the costs of scaling up integrated packages of care.

By neglecting mental health, it will be difficult to attain many of the Sustainable Development Goals related to poverty, HIV, malaria, gender empowerment and education.

This is an edited version of an article that appeared in the African Policy Review.

Legal weed: What your kids really need to know