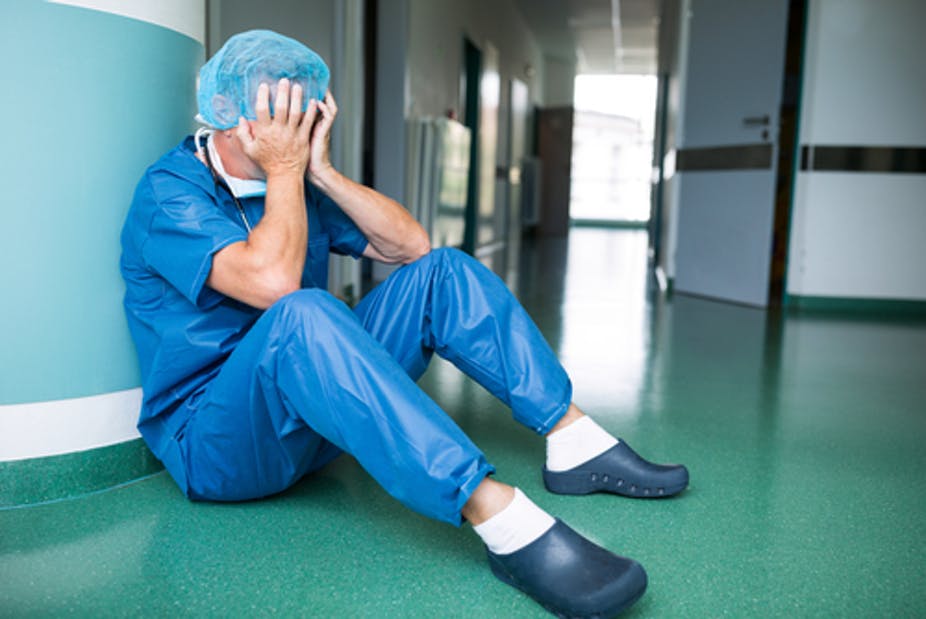 How burnout is plaguing doctors and harming patients

The presidential symposium at this year’s Annual Meeting of the Child Neurology Society of America in early October in Kansas City raised many eyebrows. The first presentation of this symposium focused on burnout rates among neurologists around the country.

Many of my colleagues felt that this was an inappropriate choice, especially with so many trainees and young child neurologists in the audience. Typically, the presidential symposium at a conference of such eminence addresses an issue of scientific importance. But some other colleagues felt that this discussion was essential and that the elephant in the room cannot be ignored anymore.

As I sat through it, I felt that the presentation was outright depressing, with speakers belting out dismal data about the state of mind of neurologists around the country. The most striking statistic was that about 60 percent of neurologists in the U.S. were experiencing burnout symptoms, including emotional exhaustion or lack of a sense of accomplishment. They also showed signs of depersonalization, which is an impaired perception of self and others that can lead to lack of empathy, including for patients.

I have been taking care of patients for more than two decades since graduating from medical school in 1994. I had not even heard of physician burnout until about four years ago when a lot of data started getting published. However, it is now a subject of discussion among physicians on wards, in clinic and at conferences, as we all realize that it is a menace.

The core that provides care

Unsurprisingly, the rot extends beyond the field of neurology. Several reports recently have highlighted that physician burnout rates across many major specialties in the U.S. have reached epidemic proportions. For example, a survey earlier this year suggested that the physician burnout rate exceeded 50 percent for the fields of emergency medicine, obstetrics and gynecology, family medicine, internal medicine, critical care, anesthesiology, pediatrics, neurology, urology, cardiology, rheumatology and infectious disease.

This is bad for doctors, and it’s bad for patients. Physician burnout is a public health hazard, because it is a danger to patient safety and leads to poorer care.

The presidential symposium got me thinking about my own professional life. Was I positive about my career? What made me continue to pursue the practice of neurology? And, did anyone at work inspire me to remain engaged?

As I reflected on these questions about what helps me avoid burnout, an obvious answer came immediately: I knew that I continually looked up to two senior physicians in my division who trained me to be a child neurologist about a decade ago and now happen to be my colleagues.

But then I realized that there were some others who served as my inspiration at a subconscious level.

One of them is a medical social worker who joined us just a few months back. Imposing in stature, with a crop of curly high-top hairdo that makes him appear even taller, he is at ease when interacting with kids and parents alike. The focus of his work is to provide support to families that are overwhelmed with the care of children with chronic neurological illnesses. I can rely on him to come up with solutions to any of my patients’ problems, whether it is finding mental health support or getting insurance coverage. And he manages to handle an extremely demanding schedule without ever appearing to be hurried. While many of us dread electronic medical record keeping, his notes wondrously manage to not only incorporate precise wordings but also have the most aesthetically pleasing fonts.

The other co-worker who inspires me guards the front desk of our office. He ushers in patients and their families. This may not sound like an important job to laypersons. But he gives a new meaning to the art of making a first impression, the art of putting sick patients and their families at ease. And he does so day in day out with warmth that few can ever manage to radiate.

The four individuals mentioned above have little in common, except that they directly interact with and take good care of patients and their families.

At the same time, I, like most doctors across America, have scores of colleagues who never interact with a patient or directly contribute to the actual care. These include billers, coders, financial counselors, accountants, managers, directors, strategists and so on. They play an increasingly critical role in the complex multi-payer health care setup as it operates today.

Unfortunately, the nurses, the therapists, the physicians, the pharmacists, the social workers – the folks who interact with patients and directly contribute to the provision of care – are arguably becoming smaller in their significance within the health care system of America.

The entire industry’s focus seems to have shifted to administration and the business side of medicine. There are data to support this: We spend way more on administrative costs than any other country around the world to deliver care, particularly in the hospital setting. This shift in focus is likely the central cause of burnout.

Can the setup be overhauled or the course be reversed?

My grandfather once risked his life and crossed a flooded river on a horseback to steer a woman in the midst of a complicated labor to safety. He treated the poor free of charge, and he took money from the rich to build a hospital in an area of India where medical care was in short supply. He had nothing much to worry about then, except his conscience.

In 21st-century America, we can’t hope to recreate such a utopian scenario. But we can certainly restructure the health care setup enough to help us restore some of the passion. In my opinion, adopting a single-payer health care system will help cut administrative layers. A majority of physicians in the U.S. support moving to a single-payer model, according to a recent survey.

I offer an additional or an alternative solution, one that will require innovative strategies to implement: Any person engaged in the health care industry in an administrative capacity ought to spend at least 20 percent of time and effort in interacting directly with patients. This will put the patients back in the focus and bring passion back into the field of medicine.

How much sleep do we need?

Should we edit the genomes of human embryos? A geneticist and social scientist discuss