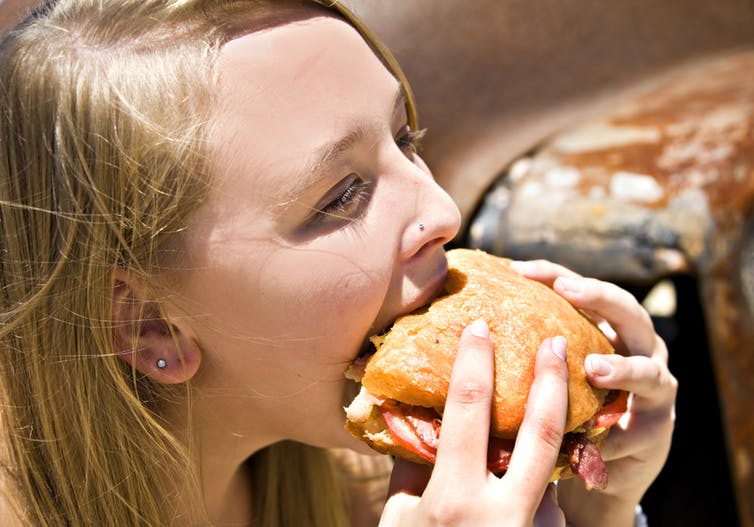 According to the Australian Institute of Health and Welfare, 63% of Australian adults are overweight or obese.

But it’s much harder to estimate how many are within a healthy weight range but have poor diets or sedentary lifestyles. These can cause significant health problems that will often be missed because the person appears to look “healthy”.

Read more:
I’m not overweight, so why do I need to eat healthy foods?


How do we judge the health of weight?

Obesity statistics often take estimates of body fat using body mass index (BMI). Although BMI isn’t perfectly correlated with body fat percentage, it’s a quick and easy method for collecting data using just the person’s height and weight. If the BMI is higher than 25, a person is considered “overweight”. If it’s above 30, they’re considered “obese”. But BMI doesn’t tell us how healthy someone is on the inside.

Using additional lifestyle measures, such as diet and exercise frequency over the last year, a recent report from the Queensland Health department estimated 23% of those who are not currently overweight or obese are at risk of being so in the future.

Read more:
We asked five experts: is BMI a good way to tell if my weight is healthy?


If you’re not overweight, does a healthy lifestyle matter?

Many people think if they’re able to stay lean while eating poorly and not exercising, then that’s OK. But though you might appear healthy on the outside, you could have the same health concerns as overweight and obese individuals on the inside.

When considering risk factors associated with heart disease and stroke or cancer, we often think about health indicators such as smoking, cholesterol, blood pressure, and body weight. But poor diet and physical inactivity also each increase the risk for heart disease and have a role to play in the development of some cancers.

So even if you don’t smoke and you’re not overweight, being inactive and eating badly increases your risk of developing heart disease.

Little research has been done to compare the risk diet and exercise contributes to the development of heart disease in overweight versus skinny but unhealthy individuals. However, one study measured the risk of different lifestyle factors associated with complications following acute coronary syndrome – a sudden reduction in blood flow to the heart.

It found adherence to a healthy diet and exercise regime halved the risk of having a major complication (such as stroke or death) in the six months following the initial incident compared with non-adherence.

Unhealthy diets are bad for your body, but what about your brain?

Recent research has also shown overconsumption of high-fat and high-sugar foods may have negative effects on your brain, causing learning and memory deficits. Studies have found obesity is associated with impairments in cognitive functioning, as assessed by a range of learning and memory tests, such as the ability to remember a list of words previously presented some minutes or hours earlier.

Notably, this relationship between body weight and cognitive functioning was present even after controlling for a range of factors including education level and existing medical conditions.

Of particular relevance to this discussion is the growing body of evidence that diet-induced cognitive impairments can emerge rapidly — within weeks or even days. For example, a study conducted at Oxford University found healthy adults assigned to a high-fat diet (75% of energy intake) for five days showed impaired attention, memory, and mood compared to a low-fat diet control group.

Another study conducted at Macquarie University also found eating a high-fat and high-sugar breakfast each day for as little as four days resulted in learning and memory deficits similar to those observed in overweight and obese individuals.

These findings confirm the results of rodent studies showing specific forms of memories can be impaired after only a few days on a diet containing sugar water and human “junk” foods such as cakes and biscuits.

Body weight was not hugely different between the groups eating a healthy diet and those on high fat and sugar diets. So this shows negative consequences of poor dietary intake can occur even when body weight has not noticeably changed. These studies show body weight is not always the best predictor of internal health.

We still don’t know much about the mechanism(s) through which these high-fat and high-sugar foods impair cognitive functioning over such short periods. One possible mechanism is the changes to blood glucose levels from eating high-fat and high-sugar foods. Fluctuations in blood glucose levels may impair glucose metabolism and insulin signalling in the brain.

Many people use low body weight to excuse unhealthy eating and physical inactivity. But body weight is not the best indicator of internal well-being. A much better indicator is your diet. When it comes to your health, it’s what’s on the inside that counts and you really are what you eat.

What is hedonism and how does it affect your health?