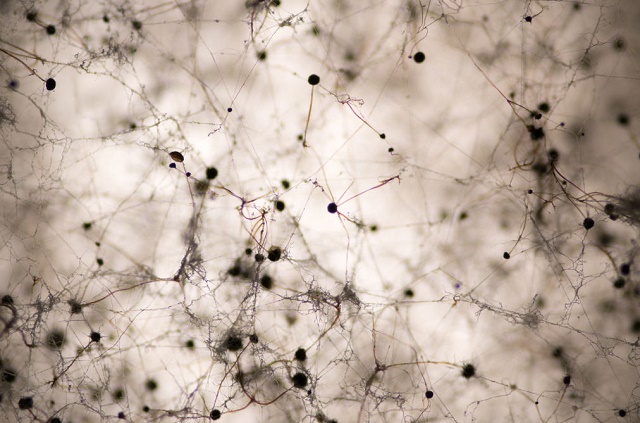 Microbes have their own version of the internet

Creating a huge global network connecting billions of individuals might be one of humanity’s greatest achievements to date, but microbes beat us to it by more than three billion years. These tiny single-celled organisms aren’t just responsible for all life on Earth. They also have their own versions of the World Wide Web and the Internet of Things. Here’s how they work.

Much like our own cells, microbes treat pieces of DNA as coded messages. These messages contain information for assembling proteins into molecular machines that can solve specific problems, such as repairing the cell. But microbes don’t just get these messages from their own DNA. They also swallow pieces of DNA from their dead relatives or exchange them with living mates.

These DNA pieces are then incorporated into their genomes, which are like computers overseeing the work of the entire protein machinery. In this way, the tiny microbe is a flexible learning machine that intelligently searches for resources in its environment. If one protein machine doesn’t work, the microbe tries another one. Trial and error solve all the problems.

But microbes are too small to act on their own. Instead, they form societies. Microbes have been living as giant colonies, containing trillions of members, from the dawn of life. These colonies have even left behind mineral structures known as stromatolites. These are microbial metropolises, frozen in time like Pompeii, that provide evidence of life from billions of years ago.

Microbial colonies are constantly learning and adapting. They emerged in the oceans and gradually conquered the land – and at the heart of their exploration strategy was information exchange. As we’ve seen, individual members communicate by exchanging chemical messages in a highly coordinated fashion. In this way, microbial society effectively constructs a collective “mind”.

This collective mind directs pieces of software, written in DNA code, back and forth between trillions of microbes with a single aim: to fully explore the local environment for resources using protein machines.

When resources are exhausted in one place, microbial expedition forces advance to find new lands of plenty. They transmit their discoveries back to base using different kinds of chemical signals, calling for microbial society to transform from settlers to colonisers.

In this way, microbes eventually conquered the entire planet, creating a global microbial network that resembles our own World Wide Web but using biocehmical signals instead of electronic digital ones. In theory, a signal emitted in waters around the South Pole could effectively travel fast to waters around the North Pole.

The similarities with human technology don’t stop there. Scientists and engineers are now working on expanding our own information network into the Internet of Things, integrating all manner of devices by equipping them with microchips to sense and communicate. Your fridge will be able to alert you when it is out of milk. Your house will be able to tell you when it is being burgled.

Microbes built their version of the Internet of Things a long time ago. We can call it the “Internet of Living Things”, although it’s more often known as the biosphere. Every organism on the planet is linked in this complex network that depends on microbes for its survival.

More than a billion years ago, one microbe found its way inside another microbe that became its host. These two microbes became a symbiotic hybrid known as the eukaryotic cell, the basis for most of the lifeforms we are commonly familiar with today. All plants and animals are descended from this microbial merger and so they contain the biological “plug-in” software that connects them to the Internet of Living Things.

For example, humans are designed in a way that means we cannot function without the trillions of microbes inside our bodies (our microbiome) that help us do things like digest food and develop immunity to germs. We are so overwhelmed by microbes that we imprint personal microbial signatures on every surface we touch.

The Internet of Living Things is a neat and beautifully functioning system. Plants and animals live on the ecological waste created by microbes. While to microbes, all plants and animals are, as author Howard Bloom puts it, “mere cattle on whose flesh they dine”, whose bodies will be digested and recycled one day.

Microbes are even potential cosmic tourists. If humans travel into deep space, our microbes will travel with us. The Internet of Living Things may have a long cosmic reach.

The paradox is that we still perceive microbes as inferior organisms. The reality is that microbes are the invisible and intelligent rulers of the biosphere. Their global biomass exceeds our own. They are the original inventors of the information-based society. Our internet is merely a by-product of the microbial information game initiated three billion years ago.

Extinguished and anguished: what is burnout and what can we do about it?