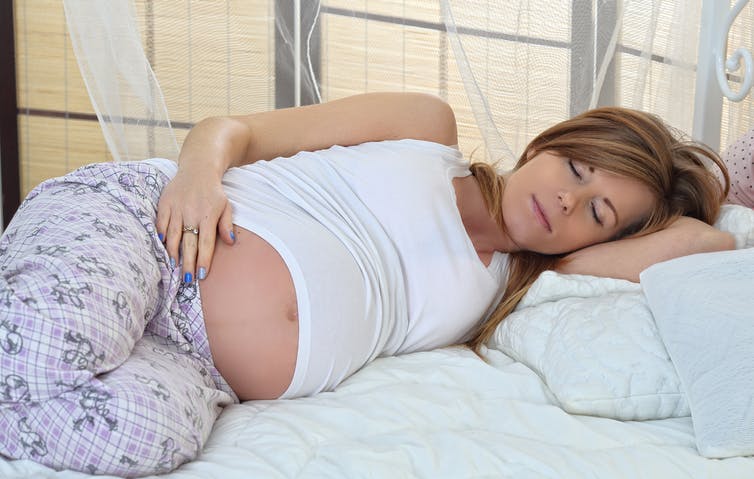 Sleeping on your back increases risks of stillbirth

Pregnancy and Infant Loss Awareness day on Oct. 15, 2017 draws our attention to a bleak statistic — an estimated one in four pregnancies end in a loss. Many of these are early miscarriages. But in Canada about one in 125 pregnancies end in a stillbirth — that is, the death of a fetus in utero after 20 weeks gestation.

Countries such as Korea and Finland have much lower rates of stillbirth, so we know that there is more we can do to prevent it. There is research on the risk factors that increase the chances of a stillbirth. Yet many pregnancy guides do not give enough information about stillbirth, in the belief that women do not want to be frightened about pregnancy loss.

Information about how to prevent stillbirth needs to get into the hands of women who need it, even if it leads to an uncomfortable conversation. As a medical librarian, my job is to connect people to trusted information about their health. When dealing with a taboo topic, such as stillbirth, this is even more challenging as both health care providers and women might be afraid of increasing anxiety, rather than improving health.

We also want to ensure that women who have had a stillbirth in the past and may have slept on their back do not feel guilt over doing so. I know, because I myself have had a stillbirth. With the passage of time, I cannot honestly answer how I might have slept that night when my twins died, but it is still something that worries me.

While some risk factors are not things most pregnant women can change, there are two very simple things women can do, to lower the odds.

There are two methods described in the medical literature about how to count your baby’s kicks: the Sadovsky method and the Cardiff method. In the Cardiff method, you count 10 movements and record how much time it takes for you to reach 10. In the Sadovsky method, you are asked to count how many movements you feel within a specific time frame, usually 30 minutes to two hours. In either case, the most important consideration is that you should be aware of your baby’s normal movements.

Any decrease in fetal movement should prompt a phone call or visit to your health care provider immediately. We don’t shame people for seeking medical advice when they have chest pains. Reduced fetal movements are similar to chest pains — a warning sign that something could be wrong. See your doctor or midwife and don’t delay or feel guilty for taking up their time!

2. Don’t sleep on your back

In the first study, researchers in New Zealand put 10 pregnant women who were otherwise healthy into MRI scanners, to see if they could see changes in blood flow when they were lying on their backs or on their left side. They found that cardiac output (how efficiently the heart pumps blood) was the same in both positions.

However the blood flow and diameter of the inferior vena cava were reduced when lying on their backs. This affects how blood flows back to the heart from the body. The researchers speculate that this might contribute to stillbirths in some instances.

The second study, also from New Zealand, placed 30 pregnant women in a sleep lab. They monitored their breathing and position throughout the night to see if there was a relationship between lying on their backs and measured breathing. While none of the women met the criteria for sleep apnea, they didn’t breathe in as deeply when they were lying on their backs.

All of this was a follow up to earlier research which had proposed the same hypothesis, that sleeping on your back increased the risk.

Delivering timely information to prevent stillbirth is important, and withholding information out of a fear you’ll frighten women is patronising at best and potentially dangerous at worst.

What’s more, witholding information does little in an era where most people can get online and are not always equipped to evaluate what information is useful and how to put it into context. Health care providers can do more to partner with librarians on delivering evidence-based information to their patients. This is certainly true with information about pregnancy, but also in many areas of health where the information that needs to be delivered is complex, and requires more time to be evaluated than is available to most doctors.

Women deserve better communication about their health and the health of their babies when pregnant. While counting kicks and sleeping on your left side aren’t a guarantee that you’ll have a safe and healthy pregnancy, they are easy, low cost ways to reduce the risk.

When Do Women Ovulate?